Another Hit? Find Out Who Burna Boy Is Cooking With

African giant, Burna Boy has been spotted in the studio cooking another hit with seasoned beatsmith, Rexxie.

Music producer, Rexxie took to his Instagram account on the 16th of February 2021 to post photos and a video clip of Grammy-nominated singer, Burna boy’s recording session with him as they worked on another hit track. Spaceship records signee, Buju was also present in the studio. He captioned the photo;

Grammy boys at it again! 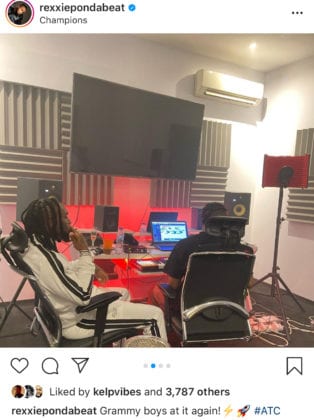 Burna Boy and Rexxie worked on a single titled ‘Bebo’ off his Grammy-nominated album, TWICE AS TALL released in August, 2020.

Watch the video below;

How to Pitch Your Music for Trending & Playlists

Wizkid Wins Artiste Of The Year Ahead Of Davido, Burna Boy And Mayorkun